The system provides an infinitely flexible and configurable network of intelligent firing hubs, each capable of firing 32 or 64 cues, via satellite connection boxes with 8 cues on each, to get the cues closer to the pyro.
The MATRICKS system was trialled extensively throughout 2009 and used successfully at the Eastnor Firework Champions 2009 Musical Fireworks Competition.

We now fire all of our displays using the Matricks Systems, providing precise firing and additional safety, for both spectators and crew. Please feel free to contact us if you would like to know more. 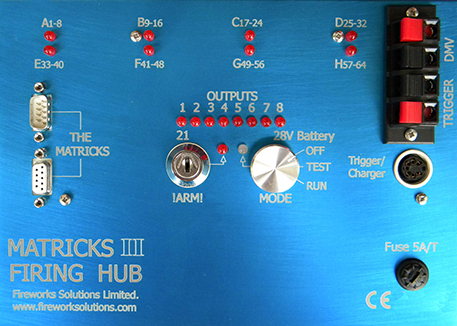 The display design is programmed using the Matricks Display Manager software; a simple and intuitive user interface that allows you to design store and download event sequences to any Firing Hub on the Matricks Network. All the Hubs are the same, any can be used as the Master Hub, making provision of a spare system on site really simple. Once designed a sequence or programme can be saved to any Hub or all of them to prevent duplication of design effort. Once you have designed a sequence that worked particularly well you can save the sequence and re-use it on subsequent shows without having to design it all again from scratch.

The Display Designer software allows you to import pyro from its own costed stock list, complete with delay and persistence characteristics to allow you to design a show to time and budget. The software also generates stock inventory and NEC totals as well as facilitating re-ordering of stock, with simple 'order more' 'use soon' and 'obsolete' markers.

A scaled graphical representation of the display area allows you to allocate timed pyro to your physical layout design. You can then connect placed pyro automatically to the nearest firing cue or allocate specific cues to specific effects. The equipment needed is represented too (e.g. shell racks and mortra tubes, candle frames, firing systems and satellites etc.) so in one printout you also have the kit list for the display as well.

Once the design is complete, timing defined and all pyro physically placed and connected to the firing system, the software checking tools can be used to check that the timing and triggers and stock allocations all look sensible. The software then autogenerates the firuing order and shell/mine loading lists (by size, aphabetically sorted for loading and physically listed by rack for ignitering) by pod.

You can import Audio files with Display Designer and tag them to events. Once pyro has been allocated to the tagged events, Display Designer automatically adjusts for pyro delays, generates the firing programmes for the hubs and allows you to load them on to the hubs across the network, you can then rehearse the display. The Matricks Manager software is supplied free of charge with the Hub.

The in-sequence timing accuracy is better than 0.1ms, with firing intervals from between 1ms (dependent on your igniters) and 68minutes between cues! Maximum network latency 5ms between 36 hubs across the entire network.

The network communications are robust and self-healing, employing a bespoke RS485 protocol connected together using standard Cat5E patch cable for distances of up to 1.2km.

A PyroPort provides a USB interface to your laptop or desktop PC. The programme is stored on the Matricks hubs; there is no need for a laptop on site other than to perform detailed diagnostics of the entire system or to alter the programme to make last minute alterations. A wireless PyroPort is in development which will allow you to diagnose and if necessary edit the programme for the entire set up on site from the comfort (and the dry!) of your van.

Full diagnostics are available across the Matricks Network; Battery Voltage is monitored on every Hub and the igniters can all be tested. The Matricks Manager software main window displays a system summary allowing one test reassurance that all is as designed and correctly connected. The Hubs may also be put in to rehearse mode so the display design can be tested without firing any pyro.

Each of the cues is designed to deliver up to 3.5Amps at 24V for a duration that can be set by the user (default 80ms). This guarantees the firing of up to 3 off, 1.7Ohm (or higher) igniters in parallel per channel. Setting the firing pulse shorter allows the system to fire successive channels faster; provided you are using a good quality fast igniter (see our recommended igniters). There is an enormous variety of igniters on the market, all with very different specifications and properties. We recommend Meta-Pyro Igniters. If you are in any doubt how to obtain the best from the Matricks II firing system and your igniters, we would be glad to help. (The base unit has 32 cues, the addition of an internal expansion card converts a Matricks Hub to 64 cues).

Any output can be fired multiple times. This allows any Hub output to be used as a trigger signal, to initiate other MatricksII Hubs repeatedly, or your existing systems (if they are triggered by a Voltage pulse). This is very effective if you are using other firing boxes to act as effects controllers or sequencers.

The Hubs can be triggered by an input pulse (fully isolated input, 10 to 35Vdc, pulse from 30ms to 1s) or voltage is available for use with existing Volt free contacts, e.g. relay contacts, for use with your existing firing systems/buttons/switches. The trigger lead connected to the Master Hub can be used to initiate sequences or the Hubs may be triggered by each other, either by utilising discrete cue outputs or across the Matricks network. All the Hubs on the Matricks follow the Master Hub, any Hub can be defined as the Master.

The trigger lead has a mode indicator light to show the status of the Hub you designate as the Master on the Matricks network, a trigger button and a Dead Man handle; let it go, the entire network stops firing. You can then choose how to re-start the display (if you can) either carrying on exactly from where the display was paused, or choosing to start at the next 'scene' in the display. If you decide to skip over a sequence (for example if a cake has fired too quickly or not at all) the software works out if it has skipped over any firing events in its programme and at the end of the display when the master dead man is released, all of the LEDs flash as a warning to the Display Manager that there maybe live, unfired pyro in the display still.

Each Hub contains its own re-chargeable battery pack which can either be charged by connection of the charger to the trigger/charger lead socket on each Hub, or the Hubs may be charged by the connection of the charger to one Firing Hub on the network; all the other Hubs will be charged across the network. Battery life is easily in excess of 24 hours in standby before firing the display and service life is in excess of 5 years (provided the Hubs are stored and maintained correctly). When turned on, the networked Hubs will attempt to recharge a hub that has a low battery across the network cables.

The hubs are extensively weather proofed and have been tested in heavy rain and from -20 to +50C ambient and are supplied in a metalised case for protection against the elelements and pyro in the field. A unit was tested while armed and ready to fire with the firing circuits immersed in water and no unsafe condition was reached. The unit successfully fired all 32 channels and was returned to full service with only minor component replacement/servicing. EMC testing has been performed to show that the system remains safe and suffers no ill effects from mobile phone, portable radio and CB radio radiation and has been used near HT Power lines and on airfields with no adverse effects from land or aircraft Radar. No interference generated by the units has been detected.